“Merry Xmas from Orchard Beach” up at Spinetingler 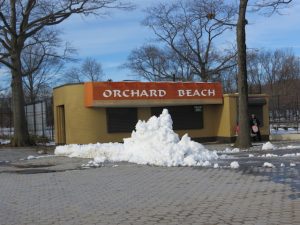 My story “Merry Xmas from Orchard Beach” is now up at Spinetingler magazine. Many thanks to Jack Getze and Sandra Ruttan for publishing it.

I’ve always wanted to write a story set in the Bronx Riviera. I went there several times as a kid, the memory of it being very distinct from my memory of Coney Island. When I went back as an adult, I was struck by the sense that this place had been quite magnificent once but had fallen into disregard and decay, cracked sidewalks, abandoned colonnades, a place where dreams floated away like globs of suntan lotion atop salty, mucky water. Well, hello, noir!

This is my second story for Spinetingler. A few years ago they published “Watching the Iguanas,” which is now included in Roachkiller and Other Stories.

Here is a quick excerpt from “Merry Xmas from Orchard Beach”:

“I have your money,” Ledesma said. “Where is this so-called evidence?”

“I have the evidence against your client right here.” From her coat pocket, Heather pulled out a sealed manila envelope. The day before she had folded up a couple of pages from the New York Post and shoved them in there. “Money first, my friend.”

“You know what? I think you’re a couple of jokers, and I smell bullshit. What the fuck do you really want? I got three screaming spoiled brats waiting to open their goddamned presents. If you don’t tell me what the fuck this is about, I’m getting out of here. And don’t think you can stop me.”

“You have to be kidding.”

She waved him over to one of the doorless bathroom stalls and pointed to the seatless toilet, where the water was frozen.

You can read the full story here. If you read it, and you like, please leave a comment there.