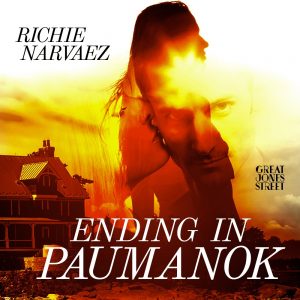 My short story “Ending in Paumanok” is available, with this loverly illustration on the fiction app, Great Jones Street. Get the app and read the story here.

Some background on the story: I went to college at SUNY Stony Brook on Long Island, so when I wanted to contribute to an anthology called Long Island Noir, I asked if I could write about Stony Brook. Alas, that was taken, but the editor Kaylie Jones said she’d love to have a story about the Shinnecock Nation, a tribe of Native Americans from the eastern end of Long Island. She asked if I knew anything about them. I said, “Sure.” I knew nothing. But I really wanted to get a story into the anthology. I admit I was a little uncomfortable writing about 1) a culture that wasn’t my own, and 2) writing about individual members of the culture in a way that wasn’t necessarily positive, since, in a noir story, just about all of the characters are morally corrupt. But I made sure to do research on the Shinnecock people, with the aim of being as respectful as possible.

The story was inspired by a Native American name for Long Island: Paumanok (“land of tribute” in the Renneiu language). Also, I wanted to allude to Walt Whitman’s poem “Starting from Paumanok,” and alluding to a poem suggested an academic character. The story of the shipwreck of the Circassian mentioned in the story is true. It’s a tragic part of Shinnecock history. I knew I wanted to include it, and it inspired me to focus on the sea as a metaphor in the story. As far as intention, for me a noir story is by definition an observation of human suffering caused by desire, manifested via lust, greed, hubris, all that fun stuff. I got the crime plot from googling Shinnecock and local crime, where I found out about cigarette smuggling on the reservation.

The story was originally published in Long Island Noir and was highlighted in a New York Times article about the book.