It Ain’t the Heat, It’s the Iniquity: SUNSHINE NOIR 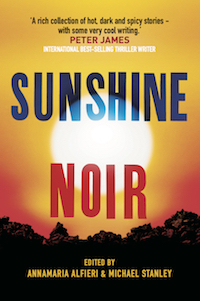 Dear Fans (both of you),
I’d like to reassure you that I have not been dormant for lo these many months but have actually been scribbling away and getting stories rejected and even accepted. It is just that sometimes the Giant Hand of Publishing moves so, so, so slow. But here’s some news! I’ve a story in the out-this-very-day Sunshine Noir anthology.

My contribution is a story called “Pale Yellow Sun” about a McGuffin gone missing in Puerto Rico (hot enough for ya?), and haughty woman who decides to get it back all by her lonesome. I could’ve written about New York City (and, boy, has this City gotten hotter every year since I was born here) or even Florida (worst sunburn of my life, screw you very much, Florida). But Puerto Rico could always use the attention, and its current troubles kept it very much in my mind. The “Pale Yellow” was inspired by the epidemic of ketamine usage on the island (the drug sometimes comes as a yellow powder). Symbolism! With the setting plus the drug plus my notion of noir, I cobbled a story. I hope you read it. I hope you like it.